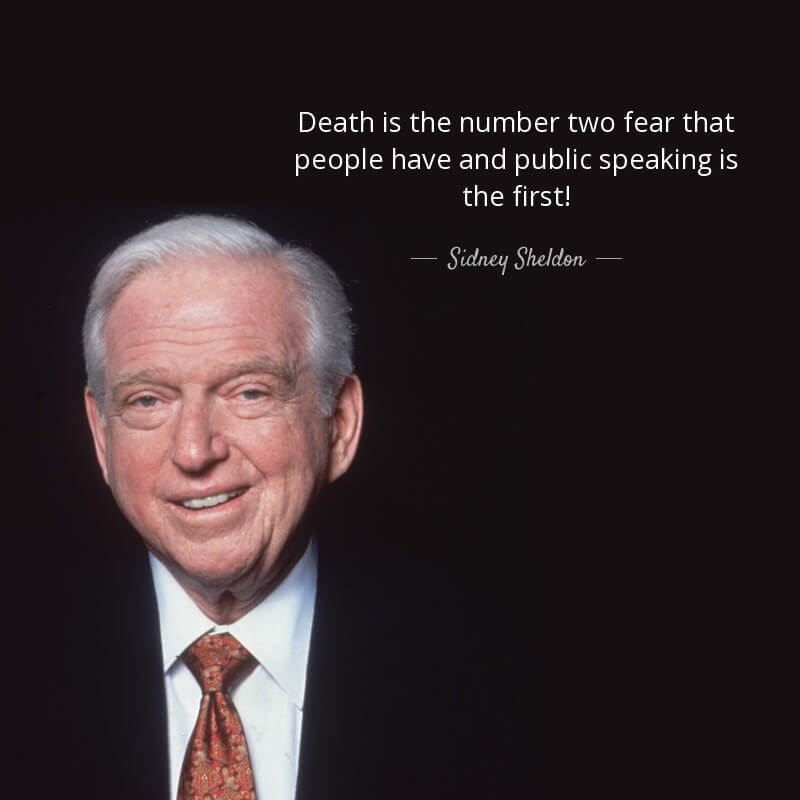 It was 10:30 in the night, way past my 13-year-old daughter’s bed time. She was stressing out, not sleeping and experiencing symptoms of nauseas, dizziness, increased heart rate. She even mentioned shortness of breath and a headache and was convinced that she was going to die (yes that too!). In short she was choking. I knew right away what this was all about. She had a presentation the next day. An audition for the school MUN (Model United Nations) club. MUN is an extra-curricular activity in which students typically role play delegates to the United Nations and simulate UN committees. So it was not a death defying activity, nor was it critical for her grades. It was an optional, extra curricular activity at school but it required speaking in front of a number of people. She has the very common case of intense stage fear.

Comedian Jerry Seinfeld once said, “According to most studies, people’s number one fear is public speaking. Number two is death. Death is number two. Does that sound right? This means to the average person, if you go to a funeral, you’re better off in the casket than doing the eulogy.”

Sometimes even the most confident speakers falter and sometimes they choke. In 2011, U.S. senator Rick Perry, during a Republican primary debate on CNBC, said he would eliminate three cabinet-level departments should he be elected. While enumerating the three, he choked and forgot the third one. He named The Departments of Commerce and the Department of Education but he forgot The Department of Energy, which ironically he was eventually assigned to run by President Trump. But it is not about the irony that we will focus our discussion on (that would require a different blog) but about the reason why folks choke when they have a speech to deliver. It could be a speech at a political rally or a speech at a family gathering, a wedding, a eulogy, a graduation party or just an audition to the school’ MUN. People choke not just during public speaking but also on other occasions like at a competitive sporting event or singing event or even theater.

Glossophobia or the fear of Public Speaking is known to be amongst the biggest fears that people have. When people are judging you, you will almost always have a stress reaction. As Mark Twain once said, “There are two kinds of speakers; those that are nervous, and those that are liars.” All the symptoms my daughter experienced were real and actually quite normal. There are several strategies one can use to deal with choking and with the fear of public speaking. Sien Beilock, Phd and President of Barnard College and one of the world’s leading experts on the brain science behind “choking under pressure” and author of the book ‘Choke’, defines choking as, “worse performance than you’d expect from an individual, given that there is high pressure or stakes associated with the situation.” Her book focuses on how mind and body can be closely linked to deal with choking. She gives a number of tips on how to not choke.

1. Practice: It almost always never fails. Practice like you have never won and perform like you have never lost. Practicing gives you the tools to control what you really need to focus on. For that purpose, it is important to practice in front of an audience or even record yourself on video. An “all eyes on you” scenario that helps you simulate how the actual performance is going to be really works. When the conditions are simulated, the actual performance improves. It also gives you the chance to focus on the process rather than the outcome. This is especially true when it comes to timed tests like SATs or Board exams, when a student creates an atmosphere in the home that is exactly like the examination hall. No interruptions, no cookies and milk from mommy and taking a timed test. My daughter’s biggest fear was that she was going to be rejected and the fear of that outcome over compensated for the actual process of preparation. If one focuses on the process and not the outcome, the results and the experience will both be positive.

2. Mindful perspective: Sien Beilock beautifully explains that any normal person will experience severe symptoms of fear, but it all boils down to how you look at it. She explains that rethinking how you are feeling will help you better prepare situations of sweaty palms, increased heart beat etc. “In other words, a sweaty palm is not a sign of failure but a sign that your body is awake and ready to go and is shunting necessary nutrients to your mind.” Meditative practices (explained in our blog Mind over Matter, the theory of Mindfulness) are often good solutions to help focus visualizing a positive outcome and performance ahead of time. It is like having a conversation with your mind saying how positively the audience is going to receive your speech and why you will succeed before you even deliver it.

3. Eliminating Pressure Points: There are several techniques that help a speaker eliminate the pressure points that could deter them from delivering a great speech. Gather your thoughts, organize your speech, write it down and practice it.

a. Some strategies to organize include, using a hook in your introduction to reel in the audience so they connect with you instantly. Examples of using hooks are — telling a story, asking a series of rhetorical questions, giving statistical data, sharing a dramatic fact or a personal anecdote etc. are various techniques to draw an audience in. Hooks can be used through out the speech to keep the audience interested.

b. Knowing ahead of time what you want the audience to take away from your speech and why you are delivering the speech is extremely critical. We all have stories to tell. Stories matter. Stories are powerful. They help people connect, they help people engage with each other. So tell your story to engage with your audience.

c. Eliminate small pressure points that force you to remember things. Use cue cards but keep looking at the audience. Even simple things like counting out — I have five things to discuss today. That may add pressure to the speaker as they have to remember all the five things. Remember senator Rick Perry? It is useful to use that technique if you have cue cards with you that can remind you of those five things.

d. Using body language is another effective tool in public speaking. Stand tall, drive passion in your delivery. Pause often. With practice one can train and work on one’s voice modulation, tonal quality; one can practice emphasizing on certain words; use good language to impress the audience, use humor and deliver great content to an audience, use examples and keep connecting with the listeners. Relish in the discomfort zone. Magic happens there.

Needless to say my daughter went the next day to audition for MUN, she had the flutters and nerves accompany her, but she saw it as her body being aware and ready to go. She prepared for the speech umpteen times and delivered it in front of her family. She visualized how impressed her teachers were before she even delivered the speech. She recorded her voice to see how she sounded before she went to school. Amidst a lot of giggles and self loathing criticism of how terrible she sounded, she undertook the uphill task of delivering her speech in public. She was selected for MUN and we crossed the first barrier of Public Speaking, which is focusing on the process and not the outcome.